Law enforcement agencies in Tharaka Nithi Sub-County have launched a manhunt for a man who purportedly assaulted his wife sexually after suspecting her of infidelity.

Kiprop Rutto, the Tharaka South Police Commander, allege that the suspect who hails from Kamatungu inserted pepper, salt, and onions in his wife’s genitals using a sharp knife. After that, the suspect sealed his wife’s private parts with superglue.

According to the victim, her husband told her they had to relocate from their home to avoid arrest by police for leaving Nairobi, which is under a lockdown owing to the COVID-19 pandemic.

The victim alleges that no sooner had they reached the Kathita River than her husband threatened to kill her, and ordered her to undress completely.

The assaulted victim then told the police that her husband ordered her to name all them she had cheated on him during his stay in Nairobi. It is then that the man used a sharp knife to insert a mixture of sand, onions, and pepper in her genitals and sealed her with superglue.

After that, the victim alleges that her abuser sealed her ears and mouth using sand and super glue, leaving her in life-threatening condition.

Ruto Cares; The Deputy President has Fed Over 40,000 Families

The public is learning of the Deputy President’s generosity just a day after Raila Odinga’s men voiced their frustrations against President Uhuru Kenyatta. Today, the hashtag #RutoCares have been a trending topic on twitter.
A twitter handle @TeamWilliamRuto tweeted, “During this period of Covid-19, DP Ruto has been donating foodstuffs to residents of Nairobi and the outcasts. God bless our Deputy President.”

Dennis Itumbi then tweeted, “YES #Ruto Cares. As others asked what he was doing with the money he gave Churches, He activated his Church, Mosques, and Political Network to distribute food in Nairobi, Kajiado and Kiambu Counties. As of Sunday, 40, 122 families had benefited.”

On Thursday, Orange Democratic Movement (ODM) Leaders led by James Orengo and the Minority Whip Junet Mohamed demanded the president and the ministry of health to account for Covid-19 billions.
The Minority Whip stated, “If it was in the democracies that have matured, this government would have resigned. We would have had a general election now. If you cannot defend people from floods, and you cannot buy them masks, you don’t even deserve to be called government.”
Junet continued, “This government has not done anything, except announcing numbers every day at 3 O’clock. It cannot be business as usual and we keep quiet. This is a government that could not even bother to give its citizens mask, let alone food. We were told there will be free hand sanitizers, where are they?” 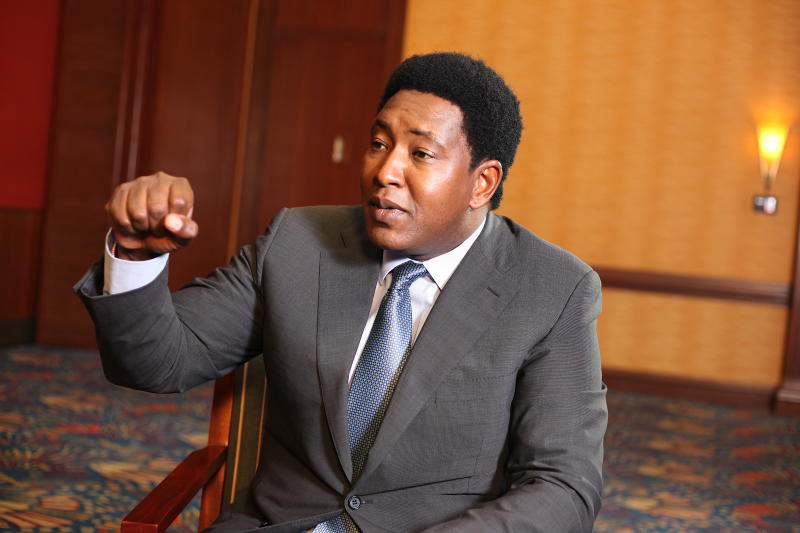 ODM Removes Narok Senator from the Committee He Chairs!

ODM seems to have made good of its threat to take action against Narok Senator, Ledama Ole Kina, who was just elected to chair County Public Accounts and Investment Committee against the wishes of the party leadership.

However, the Senator is still defiant and chaired the committee today.

The Senator seems to promise to fight for his position and it remains to be seen whether we can hold on to his position despite being de-whipped from the committee by his party.

Machakos Governor, Dr. Alfred Mutua has pulled another fast one on his critics after the completion of his county government’s offices at a cost of Ksh. 350 million.

Some Kenyans are clearly impressed by the new building and a former presidential candidate’s tweet sums up this sentiment.

However, another former presidential candidate had a different view saying leaders should avoid extravagance:

In the past few years since the establishment of county governments, many have been operating from inherited municipal infrastructure with many having to rent extra space. The National government has been urging the devolved units to build offices to minimize costs and it appears Machakos is getting it right!

What do you think of Governor Mutua’s new HQs?

Siaya Senator and Senate Minority Leadery, James Orengo has written a letter to the Speaker of the Senate protesting the results of a parliamentary committee election. In the election, Senators chose the outspoken Narok Senator Ledama Ole Kina as the chair of the County Public Accounts and Investment Committee defeating Prof. Sam Ongeri. This turn of events seems to have upset Mr. Orengo who wrote that ODM “intend to withdrawn our membership from the said committee until an appropriate resolution can be made.”

However, other Senators seem to be happy with the elections with Senator Omanga said they elected Ole Kina, because he is young, energetic and equal to the task and understands the operations of the panel as he was in the previous committee.

Why it Matters: It appears that ODM is not happy because a section of Jubilee members allied to the Deputy President backed Mr. Ole Kina.