According to The Star, David Murathe, Raphael Tuju, Nancy Gitau, and Muhoho Kenyatta are the men and woman behind the President’s ruthless changes in the Jubilee Party.

Muhoho Kenyatta, the President’s younger brother, is the chief administrator of Uhuru’s four-member council. His mandate is to finance the operations of the underground body and to mastermind most of the strategies. Allegedly, deputy president’s allies blame Muhoho for their miseries in the political arena.

Nancy Gitau is a political strategist whose name is revered by politicians. She was the chief coordinator of Kenyatta’s presidential campaign in 2013 and 2017.  It is said that Ruto pushed Gitau out of her offices in the Office of the Deputy President, accusing her of undermining his authority. Allegedly, Gitau is the engineer of the Kieleweke, a Jubilee faction opposed to the deputy president.

Raphael Tuju is the Jubilee Party, secretary General. His critics claim that he executes all the President’s decisions, even those that violate the party coalition.

David Murathe, the Jubilee Party Vice-Chair, is the military chief of the fight against Ruto. Critics say he is the attack dog and voices the President’s mind.

Just last week, Ruto’s wingmen purported that it was Muhoho who plotted the Jubilee-Kanu post-election deal that facilitated the change of the Senate leadership. Following the Jubilee-Kanu deal, Senators Kipchumba Murkomen and Susan Kihika, both close allies of the deputy president, were axed from the Senate Majority Leader and Senate Chief whip positions, respectively.

It is just the beginning of a coup against Ruto.

Corona Virus May Never ‘Go Away”, Just Like HIV

The World Health Organizations said on Wednesday that the world must learn to live with the Corona Virus as it may “never go away”.

Michael Ryan, the WHO’s emergency chief, said that the Coronavirus might become an endemic virus in society, just like HIV and Measles.

The emergency chief stated, “It is important to put this on the table: this virus may become just another endemic virus in our communities, and this virus may never go away.”

Michael Ryan said that people must accept the reality that the Corona Virus will remain in our communities and find therapies and preventions methods against the deadly virus like the world has done with HIV.

There are more than 100 likely vaccines against COVID-19 that are development. However, experts say that it is difficult to find one that is effective.

Who, however, cautions countries against easing restrictions to avoid a new wave of infection, despite the calls for learning to live the Corina virus.

“We need to get into the mindset that it is going to take some time to come out of this pandemic,” Maria van Kerkhove, a WHO epidemiologist, said during the briefing.

Diamond Platnumz Mourns the Death of his grandfather, his Step father’s Dad

Diamond Platnumz family is in mourning.

Early Thursday morning, Diamond Platnumz stepfather, popularly known as Uncle Shamte, announced on his Instagram that his father had passed on.

One hour earlier, Mama Dangote, Diamond Platnumz mother and Uncle Shamte’s wife had revealed to her Instagram followers of her father in law’s death.

The death of Uncle Shamte’s father is a big blow to the entire family considering how close they all are. Uncle Shamte seems to have a close relationship with Mama Dangote’s children, Diamond Platnumz, Esma Platnumz, and Romy Jones. Uncle Shamte has her wife’s kids picture on his Instagram page.

Mama Dangote and Uncle Shamte are mourning the death of their father barely one month after rekindling their romance that the two love to publicize. The two had broken up reasons known to them and their close family members.

As of the time of publishing this article, the cause of Mzee Shamte’s was still unknown to the public.

We belong to Allah and to him we shall return. May his soul rest in eternal peace.

Days after effecting leadership changes in the Senate and promising to crack the whip on nominated senators who skipped the State House meeting, the ruling coalition is planning to tame rebel MPs from Central Kenya.

The Jubilee Party Secretary General, Raphael Tuju, said that the party has identified the rebel legislators to be recalled. The party will pitch camp in select Mount Kenya constituencies to spearhead the removal of some elected MPs through the recall clause. Those in trouble include Gatundu South MP Kuria, Bahati MP Kimani Ngunjiri, Kiharu MP Ndindi Nyoro, Kandara MP Alice Wahome, Mathira MP Rigathi Gachagua and Kikuyu’s Kimani Ichung’wa who are some of the President’s vocal critics.

Blessings Galore as Juliana Kanyomozi Gives Birth to a Boy

Juliana Kanyomozi is the newest celeb mum is East Africa as she welcomes a bouncing baby boy.

Juliana announced to the world regarding the arrival of her baby around 10.45 P.M on Wednesday on her social media platforms.

Her swarm of fans immediately sent singer congratulatory messages. Juliana’s Instagram post had recorded over 12, 000 likes and over 2,500 comments in 55 minutes, proving how much the public shares in her joy.

The news, however, comes as a shock to her fans as there had been no hint of her pregnancy.

Baby Taj is Juliana’s second-born, having lost her firstborn, Keron, in July 2014.  The 11- year-old boy had passed on at Agha Khan hospital in Nairobi from complications of a severe asthmatic attack.

On September 19, 2019, Julian Kanyomozi paid a beautiful tribute to her late son on her Instagram page. She had written, “My dearest son Keron, happy birthday! I will light up a candle as I think of you today. You are missed by everyone.” 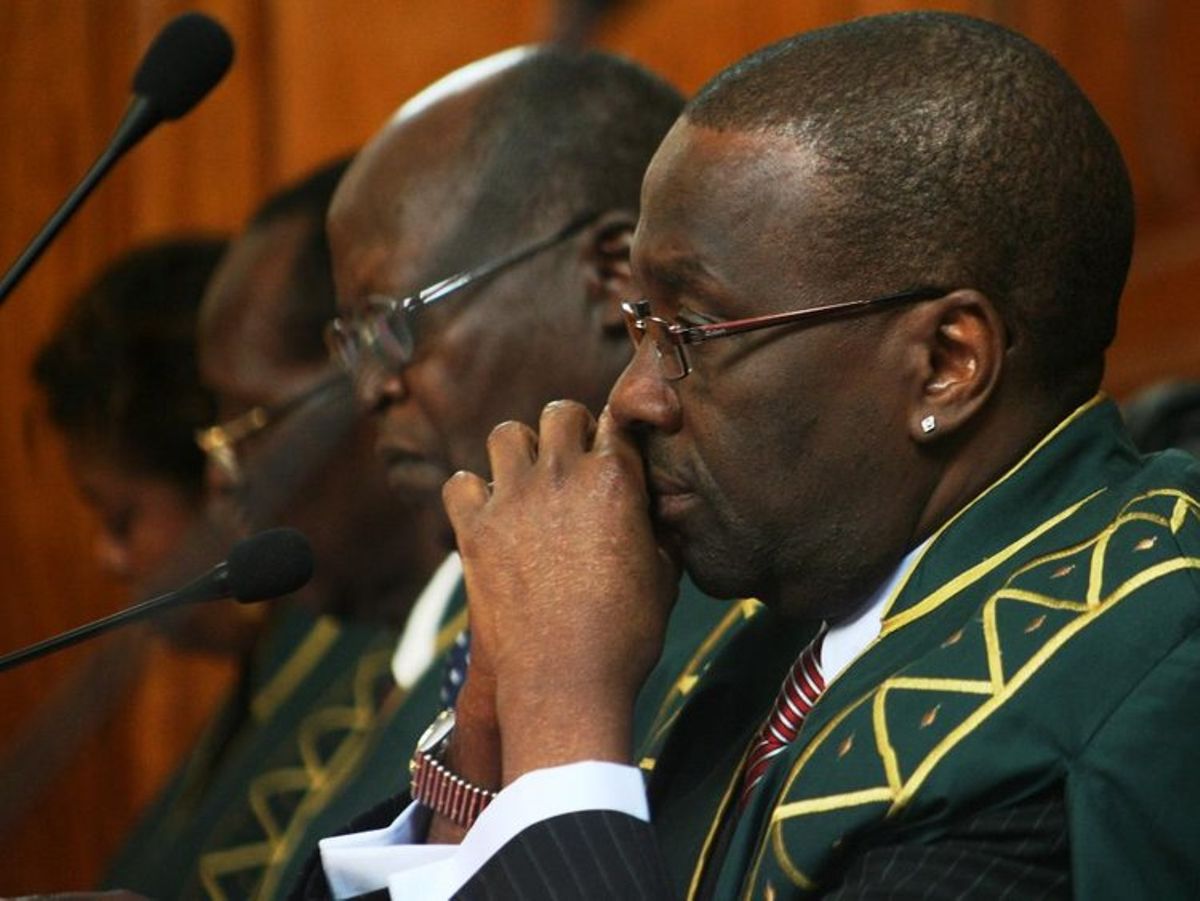 In a tweet accompanied by a cartoon depicting the famous declaration made by the former President Daniel Moi that KANU will rule Kenya for 100 years , Mr. Mutunga had expressed his views that KANU’s rule has been ’59 years of pain, tears, deaths, poverty, oppression, sweat and suffering’. He added, ‘ we must deny them the other 41 years’.

Many of those commenting seemed to attack Mutunga saying he had an opportunity as the chief Justice but never did anything to change things.

Some recalled his court’s ruling in 2013 when the opposition challenged Uhuru’s win.

However. Ahmednasir Abdullahi, himself a prominent lawyer in the country, seemed to remind him that the country’s politics is out of anyone’s hands.